Bitcoin Price Prediction – May 17
An indication suggests that the BTC/USD market operations may downsize from $30,000 reading area. The crypto economy’s worth is now trading between $30,769 and $29,445 points at a minute of negative 0.60%.

BTC/USD Market
Key Levels:
Resistance levels: $32,500, $35,000, $37,500
Support levels: $27,500, $25,000, $22,500
BTC/USD – Daily Chart
The daily chart showcases the BTC/USD market may downsize from $30,000 trading spot. The positioning of the SMA trend lines above the current trading area has shown that the market is yet far from pushing out of the risk of trading under depression. The 14-day SMA indicator is underneath the 50-day SMA indicator. The Stochastic Oscillators have moved northbound from the oversold region, attempting to cross their lines around the 40 range. That signifies the possibility of having a correction so soon.

Is it ideal to follow the trend as the BTC/USD market may downsize from $30,000?

A bearish candlestick has occurred on a less-active mote to suggest the possibility of having more swing lows in the following sessions. But, the motion to the downside might not be as aggressive as it featured recently, as there has been an indication that the BTC/USD market may downsize from $30,000 trading arena soon. Long-position takers are o be alert to any active rebounding move that can emanate from the declining movement afterward.

On the downside of the technical analysis, the BTC/USD market short-position takers have to keep their stances firmly at a maximal point underneath the $35,000 resistance level against any near future efforts to push to negate the bearish trading cycle. Joining the declining nature of the market at around $30,000 may generate profit for bears for a while, especially if the price tends to move in a less-active manner. 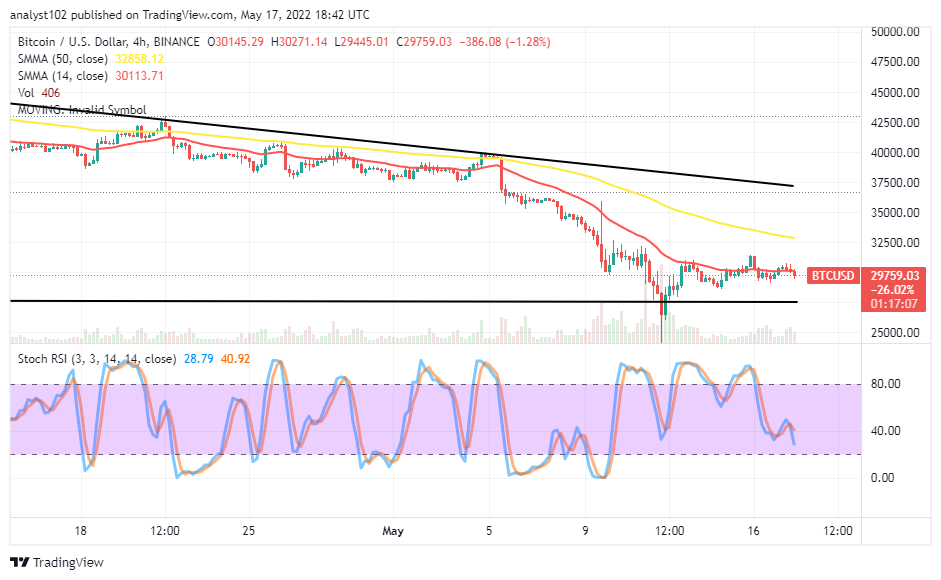 The BTC/USD medium-term chart reveals the crypto economy may downsize at the $30,000 level. The smaller SMA is around the value line, witnessing variant candlesticks characterizing rejections. The 14-day SMA indicator is underneath the 50-day SMA indicator. The Stochastic Oscillators have moved southbound to the range of 40. And, they are still pointing to the downside direction to indicate that a falling force is in the prevalence of the crypto trade.

68% of retail investor accounts lose money when trading CFDs with this provider.

Robert Kiyosaki Will Buy Bitcoin When It Dips at $1,100

MicroStrategy Buys More Bitcoin – Is this a Bottom Signal

Quadency is a digital asset management platform that provides automated trading and portfolio management solutions for both retail and institutional traders. The platform incorporates a...

So, you’re a seasoned cryptocurrency investor that has placed hundreds, if not thousands of trades over the past 12 months. While this is likely to...

3Commas vs Cryptohopper: Which is The Best Crypto Trading Bot Platform in 2022?

Automated trading platforms or ‘bots’ have become a popular way to trade cryptos. Instead of having to watch the crypto markets, and look for entry...

Cryptocurrency traders can choose from a growing number of efficient, automated trading platforms that aim to simplify the entire process and allow anyone to make...

Bitrue, one of the fastest-growing cryptocurrency exchanges, has revealed the listing of ADA as a base currency on its trading platform from Thursday, February 24....

You may have missed

Are expiring copyrights the next goldmine for NFTs?

Bitcoin’s inverse correlation with US dollar hits 17-month highs — what’s next for BTC?

You have successfully subscribed to the newsletter

There was an error while trying to send your request. Please try again.